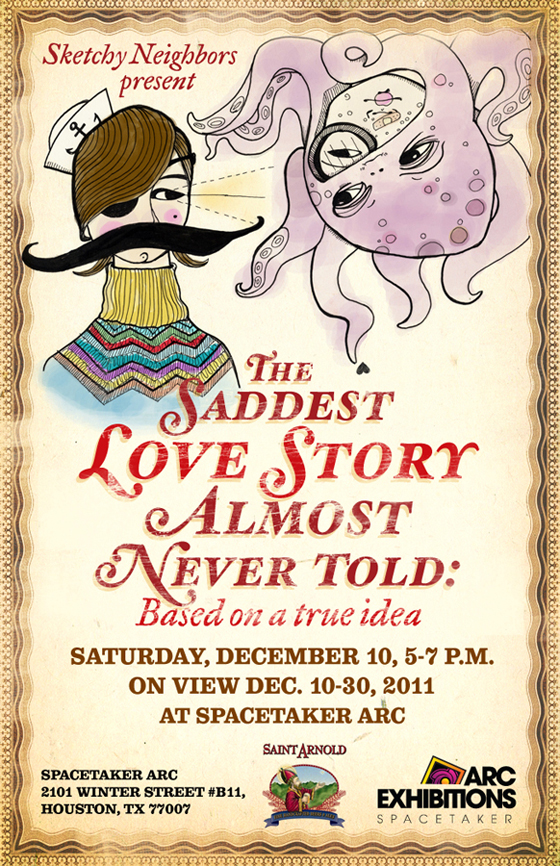 Stir some concepts in a hat, randomly select four ideas and materials, then let them fester in the minds of Sketchy Neighbors. Spacetaker presents Houston artist collective Sketchy Neighbors in “The Saddest Love Story Almost Never Told: Based on a True Idea”, an exhibition of new work based on public submissions featuring drawings, paintings and sculptures via a multitude of media including black velvet, found objects, custom snow globes, and more. In addition, the group will collaborate for the first time on a mixed-media site-specific installation entitled “Garden of Uncomfortable Truths.”

“The Saddest Love Story Almost Never Told: Based on a True Idea” will be on view from December 10th through 30th with a free public opening reception on Saturday, December 10 from 5 – 7 pm.

To add to the sketchiness, on December 21st, local writers from flash fiction publisher NANO Fiction join in for Inky Improv, an experiment in collaborative exchange where scribes and sketchers draw inspiration from audience suggestions. With a strict time limit, each round of this creative throwdown pits artists’ and writers’ wits against each other in friendly fire promising entertainment and unexpected results. Free admission and open to all.

About Sketchy Neighbors:
On a fateful night in February 2009, artists Katsola and Carlos Hernandez gathered a random collection of fellow local artists they didn’t know and hadn’t ever worked with. The goal – to start a sketch group. Exactly 39 minutes and 42 seconds into the casual meet and greet, that arbitrary congregation of artists became…the Sketchy Neighbors. Their art would consist of a theme and media/material pulled from suggestions put into a hat. The Sketchy Neighbors are Marisa Avelar, Anthony Butkovich, Brenda Cruz, Jordan Johnson, Katsola, Devon Moore, Melissa Perez, Chris Thompson, and Jeff Whiteley. For more information about Sketchy Neighbors, checkout their website http://sketchyneighbors.com/ or Facebook page http://www.facebook.com/sketchyneighbors.